This guide covers getting up and running a real example using Egg. By following along with this guide step by step, you can quickly get started with Egg development.

To begin with, let's quickly initialize the project by using a scaffold, which will quickly generate some of the major pieces of the application (npm >=6.1.0).

Then get up and run by using the following commands.

Usually you can just use npm init egg of the previous section, choose a scaffold that best fits your business model and quickly generate a project, then get started with the development.

However, in this section, instead of using scaffolds we will build a project called Egg HackerNews step by step, for a better understanding of how it works. 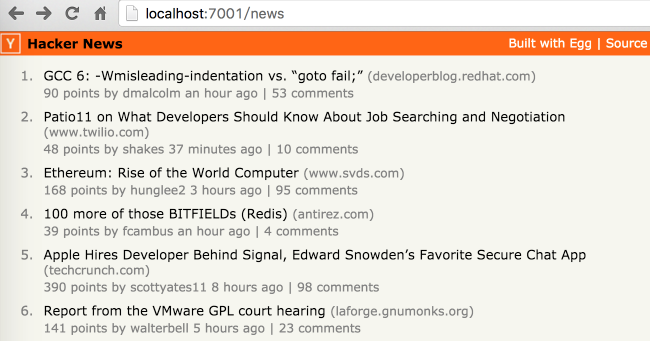 First let's create the project directory and initialize its structure.

Then add npm scripts to package.json.

If you are familiar with the MVC architecture, you might have already guessed that the first thing to create is a controller and router.

Then edit the router file and add a mapping.

Then add a configuration file:

Now you can start up the Web Server and see your application in action.

Egg has a built-in plugin called static. In production, it is recommended that you deploy static assets to CDN instead of using this plugin.

static maps /public/* to the directory app/public/* by default.

In this case, we just need to put our static assets into the directory app/public.

In most cases, data are usually read, processed and rendered by the templates before being presented to the user. Thus we need to introduce corresponding template engines to handle it.

Egg does not force to use any particular template engines, but specifies the View Plugins Specification to allow the developers to use different plugins for their individual needs instead.

In this example, we will use Nunjucks.

Then create a template for the index page. This usually goes to the app/view directory.

Then add a controller and router.

Open a browser window and navigate to http://localhost:7001/news. You should be able to see the rendered page.

Tip：In development, Egg enables the development plugin by default, which reloads your worker process when changes are made to your back-end code.

Let's create a service to fetch data from the HackerNews.

Egg has HttpClient built in in order to help you make HTTP requests.

Then slightly modify our previous controller.

We might encounter a small problem here. The time that we fetched are Unix Time format, whereas we want to present them in a more friendly way to read.

Egg provides us with a quick way to extend its functionalities. We just need to add extension scripts to the app/extend directory. For more information, cf. Extensions.

In the case of view, we can just write a helper as an extension.

Then use it in the templates.

Suppose that we wanted to prohibit accesses from Baidu crawlers.

Smart developers might quickly guess that we can achieve it by adding a middleware that checks the User-Agent.

When writing business logic, it is inevitable that we need to manage configurations. Egg provides a powerful way to manage them in a merged configuration file.

All the test files should be placed at {app_root}/test/**/*.test.js.

That is all of it, for more detail, see Unit Testing.

We can only touch the tip of the iceberg of Egg with the above short sections. Where to go from here? read our documentation to better understand the framework.